#GirlsTrip – Where to eat in Philly

Where to eat in Philly, you ask? Philly’s food scene is legit. Check out the BYO places (BYO brunch, what?!) and epic happy hours (see Double Knot below) and make a reso at one of the fancier neighborhood places. Loosen your belt loop a notch and enjoy!

Before we dive in

A little background – it’s been FIFTEEN YEARS since we graduated high school! Man those years have flown. What started as a Facebook post about a new food hall in Brooklyn escalated pretty quickly into a trip to the East Coast.

Scattered across the country since graduation, the four of us have not been in the same place together since… senior year when Alani came to visit us (she left us a year early). We’ve all come a long way since those days sitting under the library during lunch. College. Marriage. More College. Kids. It’s wild to think how long I’ve known these girls. 🙂

Aside from Kristy, who lives in Philly and let us all crash at her place (thanks!!), we flew in. Alani from San Francisco, Karen from Minneapolis, and me from Hawaii. I expected epic jetlag the first few days, but my new strategy worked and we were all up and eating shake shack at 11pm because #vacay.

We crammed a LOT into those two days. Thanks once again to Kristy for being our tour guide and planning everything! She made sure we were able to see a ton for such a short trip.

While it’s a bit of a tourist trap, I’m still a sucker for a good food hall. We started off at Dutch Eating Place and Beiler’s Doughnuts in Reading Terminal Market. The turkey sandwich was delish, but the apple dumplings are what I’d go back for. Skip all the cake doughnuts at Beiler’s and go straight for the Fritters (blueberry or apple). The line can be long, but it moves fast and those fritters are legit. They were super fresh and reminded me of a combo between a malasada and a doughnut. This is also a cool spot to swing by for omiyage since there’s so many little Philly-only shops.

Philly has a LOT to offer in terms of shopping and eating. In the City Center, you’ll find Shake Shack, Uniqlo as well as all the standard retailers (H&M, Sephora, etc). Chinatown Square is a new-ish food hall that opened up with HALAL GUYS (!) and the original rolled ice cream place from NYC (I-CE-NY). We walked through, but since we just ate didn’t pick anything up (plus, we would be in NYC in a few days). We did manage to fit in a trip to Shake Shack, even though it was at 11pm.

Aside from the quick service places, there’s a huge foodie scene and tons of restaurants that are BYO (bring your own alcohol and no corkage = amazing). On our first night, we had happy hour at Double Knot, where the happy hour menu plates and drinks were $4! The food was amazing and the four of us left super full and a bit tipsy with a tab under $50.

What’s Philly without a cheesesteak!? We went to Jim’s but were a bit disappointed. The line was long, and while that gave us time to google the right words to order, it also maybe added to the hype. We’ll have to try one of the other places next time. The meat was more like ground beef and a bit flavorless. Maybe we should’ve had it whiz wit afterall.

We had dinner at Noord on the second night – Scandinavian fare. I had rabbit for the first time (and it was delish, sorry bunnies) and wow the bread here. I probably could’ve survived on just the bread, but the rest of the food was amazing as well. I’m usually not a huge raw fish person unless it’s poke, but the salmon was tasty! It was another BYO place and we brought 2 bottles of wine and took our time enjoying the food and the company. 🙂 The restaurant is small, but they do take reservations.

Who knew that BYO BRUNCH places exist? Philly, definitely doing it right! Brought some champagne and made mimosas, because #vacay. We got the toad in a hole, corned beef and eggs and the honey cristo. The honey cristo was my fave because the sweet and savory was perfect – and it was topped with a sunny egg. Perfection. Toad in a hole was also delish, but a little too much cheese for me to handle *pops lactaid*.

After brunch, we went to the La Colombe in Fishtown. It was huuuuuge and this neighborhood 100% reminded me of Williamsburg. The guy at the register was even wearing plaid and had a handlebar mustache. Haha. If you haven’t been to a La Colombe (in Philly or in NYC) you should definitely check it out. Their draft lattes and cold brew (you can get a black and tan which is half cold brew and half draft latte) are delish.

Anyone who knows me knows how I feel about donuts – but did you know that I actually do NOT like cake donuts? I mean, does anyone even like them? Hahaha. Moving on. Kristy said that we have to try this place, as she also doesn’t like cake donuts, but loves these! So we gave them a shot. We got a fancy (smores) as well as their standard hot and fresh (Cinnamon) – and okay, fine. I’m mayyyyybe sold – but only on the hot and fresh. 😉 The fancy was okay, but too sweet and too many things going on for me.

A half-open garden / half-inside restaurant, we came here for dinner on our last night in the City. This one, although not BYO, is a place I would definitely come back to. We sat and had a drink at the garden bar before we moved inside for dinner. We ordered the Ricotta Gnudi, Berkshire Pork Belly, Collard Greens, and Overnight Bone-In Short Rib. The pork belly was melt-in-your-mouth amazing. Seriously. Their menu changes often, so definitely check in with the servers on what’s popular for the type of food you’re craving.

Heh. Alani also sneakily told the server that it was my birthday. 🙂 It was our last dinner together, so it was kind of a perfect send-off.

It was an amazing weekend that I seriously should’ve written about earlier. I can’t believe it’s already been so long! While we were there, Kristy was taking part in the Holoholo Lens Project a neat traveling photography project coordinated by Ricky Li.

I created a quick google map of everywhere we ate. 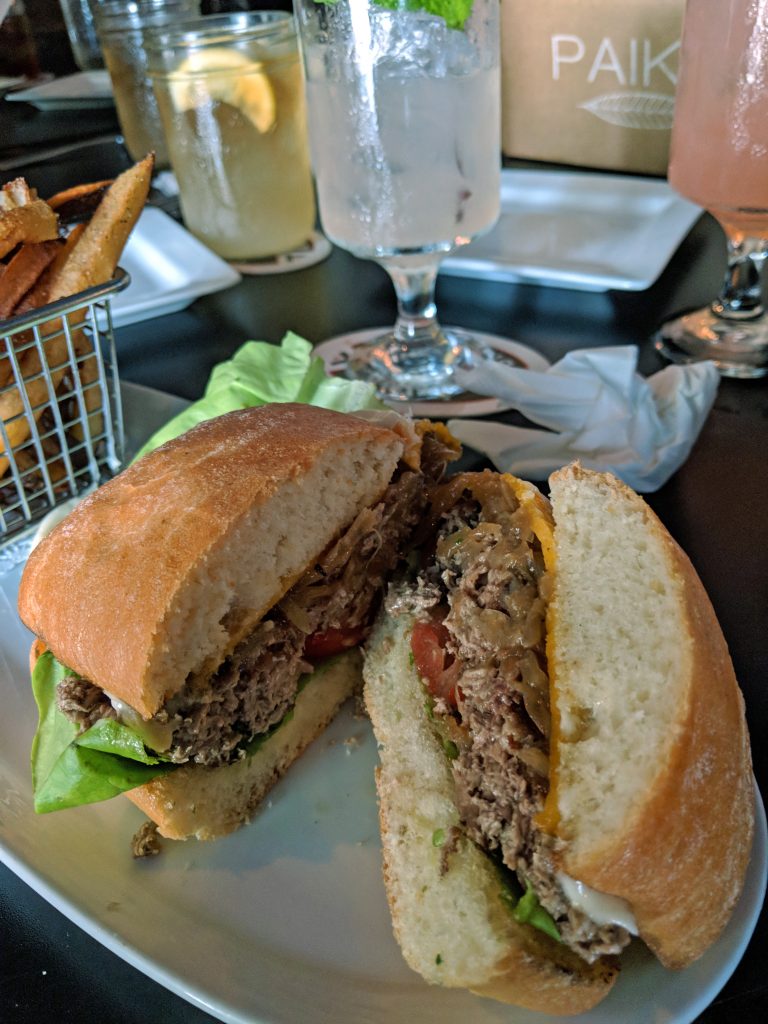