A picture is worth a thousand words

Since we already wrote about a lot of the bigger places that we stopped at while we were in Hong Kong, I figure it’d be a fun post to just write up what our full days looked like! It’s a pretty long post, so grab some coffee (or just scroll through to look for the ?).

We started the morning off at (don’t hate) Starbucks in iSquare, because coffee! Plus Ry’s mom collects the cups from all the cities they go to, so she wanted to pick one up. From there, we walked down the street to check out the Chungking Mansions.

It honestly felt like stepping into a completely different world once we walked through the doorway. Some reeeeeally aggressive people trying to sell you everything from cell phones to tailored suits. Probably worth the walk through, but better when all the shops are open later in the day. note: I didn’t take great photos of the interior, so I included a few from Bennett Cain of permanentwalkabout.com check out his site for more details / photos. Chungking Mansions, Hong Kong

From there, we walked toward the Avenue of Stars – but found out it was closed due to nearby construction. We headed to the “Garden of Stars” instead.

Just about 10 minutes away from the Tsim Sha Tsui (“TST”) MTR station, the Garden of Stars is a small park with a bunch of statues along the water. We went early (around 830a) so it was empty, but as we were leaving the tour groups started coming in. Garden of Stars, TST East Waterway

We didn’t have anything for breakfast, so now we were getting hungry. In search of food, we walked back toward TST and stopped in the basement level of Silvercord, a small shopping mall that had not only a bunch of food stalls, but an arcade in the basement, where you know we had to spend a few minutes checking out the games. Silvercord – Shopping Mall

We didn’t see any food that we were interested in, so we continued on our way toward Kowloon Park, until we walked by this place:

It smelled amazing so of course we stopped in and tried the samples. We saw this pretty much in every city we stopped in for the rest of the trip, but since this was our first time having it (and it’s delish!) I’m including it here. They have different kinds of meat and we tried a bunch before deciding to go with the pork.

From there we walked around Kowloon Park, checking out the waterfalls, flamingos, and the hilarious Avenue of Comic Stars. The latter felt a bit out of place in such a serene location, but it’s also in the middle of a bustling city, which you’re reminded of as soon as you walk back out into the street. Kowloon Park

It’s official, I’m starving. After the park we did a quick search for some dim sum and came across Crystal Jade. Highly reviewed and just five minutes from where we were in the park, it was a done deal. The only problem was that it was also inside a mall full of distractions in the form of Uniqlo, Laneige, Eyeko and every other skincare and makeup brand I have love/hate relationships with. Hahaha. Harbor City Shopping Mall

We made it, though. Crystal Jade had a computer instead of a host, and when you punched in the number of people in your party, it printed out a receipt with a number. We waited for just a few minutes before we were seated. **drools**

After lunch we actually went back to Chungking Mansions to see if it was a bit more lively during the day (it is!) and also to meet up with Ry’s sister and her husband who were staying with us at our AirBnb. They decided to head back to the room with our parents, and Ryan and I decided to make our way to Hong Kong Island.

We caught the MTR from Tsim Sha Tsui to Central on Hong Kong Island with the intention of finding Oddies Foodies. It was a bit of a trek, around 15 minutes through various side streets, but we found it in all it’s ice cream and eggette glory. I may or may not have also stopped in Fresco Cafe, a random Hong Kong style bakery we walked by, for a custard bun. I have a serious weakness for them.

Next stop – work off all the calories from the ice cream! The way up was a breeze since we got to ride every single escalator (the escalators switch directions from down to up during morning and evening rush hours – we made it in time for the afternoon switch to ride all of them up).

It was a pretty surreal experience, you continue to go up and along the way there are shops, restaurants, and winding roads. When we finally got to the top we decided to hyperlapse the entire way down. 10 minutes on Hyperlapse == WAY TOO MANY STAIRS. I was dying. Haha.

The escalators end at Tower One of the International Finance Center (“IFC”) so we walked in to cool off and since we were there, decided to check out the observation deck on the 55th floor of Tower Two. It’s a little tricky to find coming in from the escalators (you’re at the other end of the mall and when you get to Two IFC, all you’ll see is the front desk. You can ask them for directions (they spoke English) and they’ll point you around the corner down an escalator to a different check in desk – you’ll need to present ID to get to the info centre. Hong Kong Monetary Authority Information Centre – 55th floor of Two IFC tower

As if we didn’t have enough to eat yet, we read that there was a Tim Ho Wan in the IFC Mall, so we picked up some dim sum (it’s a little tough to find, so check out my earlier post for directions) and made our way to our next stop. IFC Mall

We caught the MTR from Hong Kong Station to Lok Fu Station (~30 minutes) and made our way to the Kowloon Walled City Park, about 15 minutes from the station. We ate our dim sum and walked around the park before deciding to head back toward our AirBnb. While we were at the Lok Fu Station, we noticed a poster for “Namco Playground” and if you know Ryan, then you’ll know that that’s where we were headed next. Kowloon Walled City Park

We caught the MTR to Mong Kok station, which was just a couple stops and on the way home. If you take Exit E1 and walk away from Nathan Road, you’ll be right in front of the Langham Place Shopping Mall, where Namco Playground is. This was a pretty huge mall, with hundreds of stores, restaurants and entertainment.

We took the huge escalator up to the top and made our way down all the floors, stopping in the Line Store and Namco Playground (turns out it was pretty tiny and we didn’t stay long) as well as a few other shops. Like most of the malls in Hong Kong, this places takes advantage of their vertical space and had “express” escalators that skipped floors and went up a LONG way. If you’re afraid of heights, don’t turn around when you’re on these – I definitely felt my stomach drop into my feet as we made our way to the top. Langham Place Shopping Mall

Finally back in our AirBnb, and my phone was telling me we clocked 18 miles today. We were going to call it a night, but in typical vacay mode we got hungry. So back out we went! We probably should’ve looked up a place and gone directly there, but instead we decided to walk around until we found a place that looked good.

We stopped by the Charlie Brown Cafe, but it seemed more geared toward coffee and cakes. Finally stopped at a small Japanese-style cafe on the fifth floor of a building filled with restaurants. Their omu rice hit the spot and was the perfect end to a super long day.

We got home around 930p – and immediately passed out. Hahaha. Since day 2 is less aggressive, I’ll include some pics of our AirBnb and details about that. 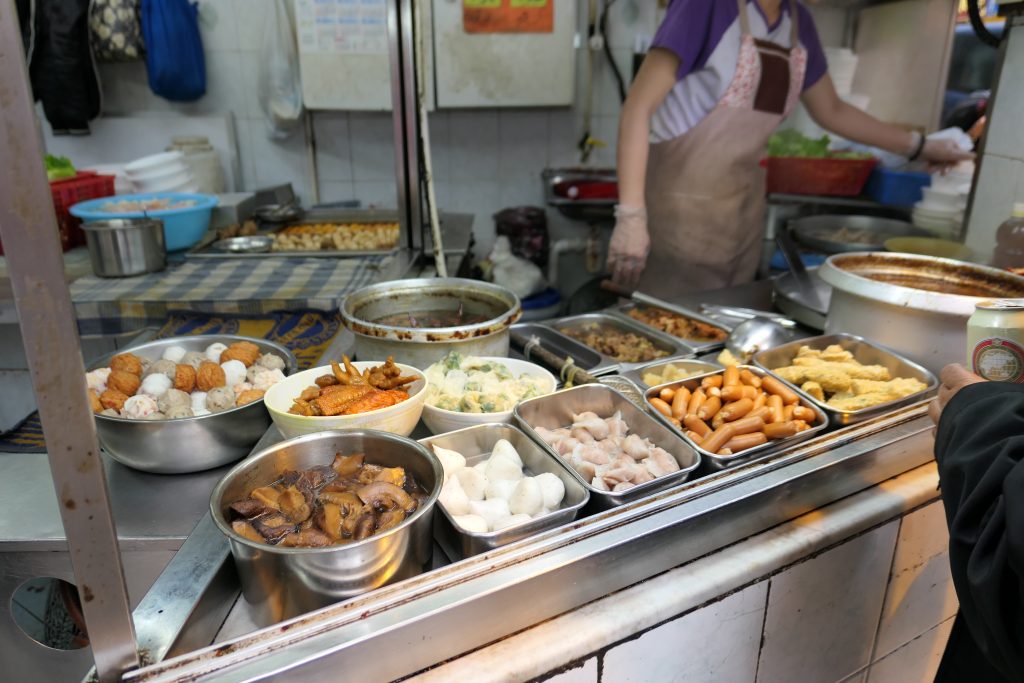 A quick peak into what we did while we were in Hong Kong. Day 2 of our trip was much more relaxed since we had to be at the cruise terminal by 2p. 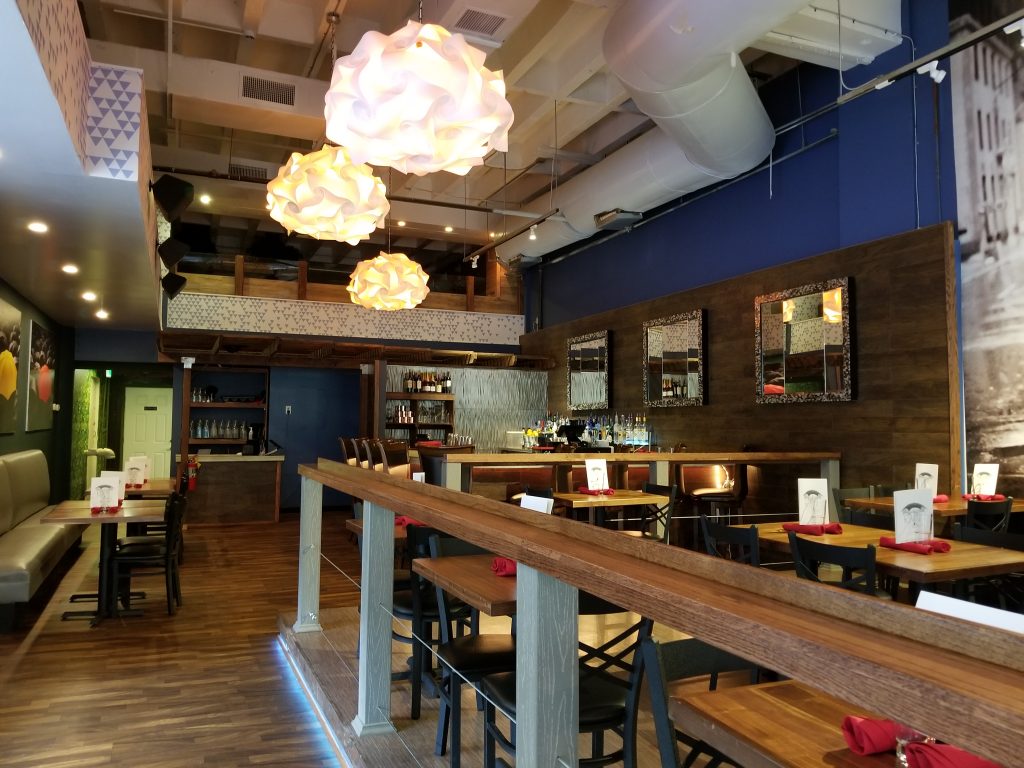 Living in Downtown seriously has its perks. Taking a quick break from the trip posts to write about some food you can eat right now!